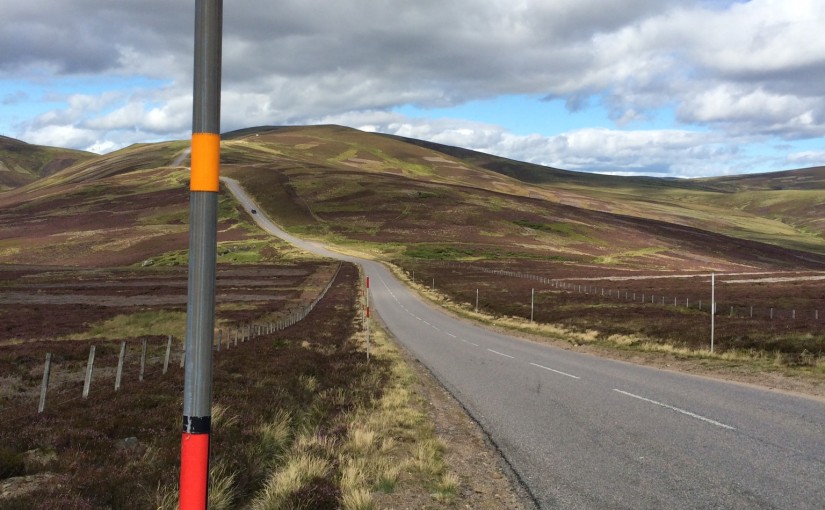 Calm. The steam from your pre-ride espresso rises vertically.

Today I cycled from Aberdeen to The Lecht ski centre in the Cairngorms and back. Whichever way I pedalled the wind was slapping my face. Which got me thinking about the Beaufort scale.

The scale was devised in 1805 by Francis Beaufort (later Rear Admiral Sir Francis Beaufort), an Irish Royal Navy officer, while serving on HMS Woolwich. Clearly he wasn’t a cyclist. If he was, this is what he’d have written…

0 – Calm. The steam from your pre-ride espresso rises vertically but only because you’re slap bang in the middle of a high pressure system that stretches from Scandanavia to the Bay of Biscay. Night time temperature’s have plummeted to – 12C and the road is covered with 3″ of black ice.

1 – Light air. The drift of bumble bees indicates wind direction which, inevitably, is always directly towards the unzipped neck of your cycling jersey. Other, stingless, insects remain stationary.

2 – Light breeze. Wind felt on exposed skin which is a blessing in summer but leads to chillblains in winter.  Leaves rustle but you think the noise is coming from your chain so you stop pedalling. Wind vanes begin to move – towards you.

3 – Gentle breeze. Leaves and small twigs constantly moving. The dead ones snap off and land in your path. You swerve to avoid a slightly bigger twig just as an articulated lorry starts to overtake you.  The weather beaten flags left up after last year’s poorly-organised sportive are extended.

4 – Moderate breeze. Dust and loose paper raised. The dust gets in your eyes even though you’ve just shelled out £200 for a pair of wraparound, anti-nuclear, eye protectors (formally known as sunglasses). Small branches begin to move but you can’t see them because your eyes are watering so much.

5 – Fresh breeze. Branches of a moderate size move. But you still can’t see them because by now you’ve accidentally rubbed cherry-flavoured energy gel into your eyes in a desperate attempt to get rid of the grit. Small trees in leaf begin to sway. You begin to sway.

6 – Strong breeze. Large branches in motion. You’re in motion. But slower than you’d expect for the effort because, whichever way you head, the wind is always on your nose. Whistling heard in overhead wires and in your helmet. Umbrella use becomes difficult and you begin to wish you’d brought that Gortex cycling onesie instead. Empty plastic bins tip over. You tip over empty plastic bins.

7 – High wind, moderate gale, near gale. Whole trees in motion. You’ve ground to a virtual standstill and dismount to squirt water in your eyes because, while that cherry-flavoured gel tastes lovely, the methadioxydrone, or whatever gives it its taste, stings like hell. Effort needed to see where you’re going.  Effort needed to walk against the wind.

9 – Strong/severe gale. Some branches break off trees, some wheels break off bikes. Some small trees blow over. Some small bikes blow over. You wish you’d still got those stabilisers from back in the day. Construction/temporary signs and barricades blow over but only at the precise moment you’re riding past them.

10 – Storm, whole gale. Trees are broken off or uprooted. Cyclists are broken and upended. Structural damage likely, particularly to the aero carbon frame that you re-mortgaged your house to buy.

12 – Storm force. Severe, widespread damage to vegetation and structures. Debris and unsecured objects are hurled about. On the third attempt you finally manage to open the back door to fetch the bike from the shed only to realise that there is no shed. You head back to the house inexplicably humming Somewhere Over the Rainbow from the Wizard of Oz to find the back door has blown shut. You haven’t got a key and there’s nobody else in the house. You utter a string of un-Dorothy-like expletives and sit on the step in your bib shorts cursing while the storm blows itself out.

If you’ve enjoyed reading this post please consider donating to my Just Giving page. I’m raising money for Willen Hospice by cycling from Paris to Nice via the Alps. Hopefully not into a headwind!

P.S. You can read about the proper Beaufort scale here and see how spookily similar mine is to the real thing!