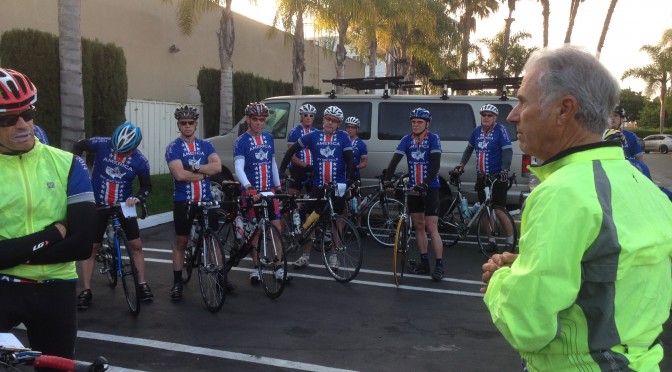 It’s 10.30 at night here in California and in precisely six and a half hours our alarm will go off on a routine that will continue for the next 28 days. Up at 5am. Breakfast at 5.30am. On the road by 7am. The early starts are necessary because otherwise there simply wouldn’t be enough daylight hours to complete the 115 mile plus days required to cross this continent in a month.

We should be asleep by now but of course sleep never comes when most it’s needed. Banging doors, whining air conditioning, whirring minds…

You’re going to be stretched further than you thought you could endure.

The words of ride leader Mike Munk are still  ringing in my ears from this afternoon’s safety briefing. With temperatures in the mid 90s Fahrenheit over the first few days, dehydration was a very real danger he’d warned. Water was going to be our biggest friend. Without enough we’d end up in hospital attached to a saline drip. None at all and we’d end up dead. Not quite the life-changing adventure Rose and I and the 20 or so other cyclists gathered in the motel meeting room had been anticipating.

I’ll introduce you to the gang along the way. But for now let me say that as health and safety briefings go it was pretty extreme. After listing every which way of falling or getting knocked off a bike Mike warned us that as soon as tomorrow lunchtime our minds would be so addled from the effort of riding in such extreme conditions we’d start behaving like Goofy. Not a mad metaphor given that Disney’s Burbank studios are just the other side of LA.

“I want your dream to become reality and not turn into a nightmare,’ he said towards the end of the briefing. Too late Mike. Too late.