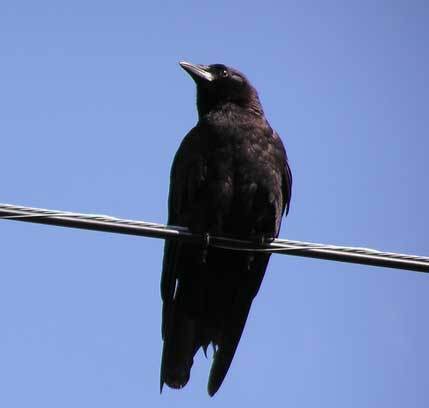 There’s a crow sitting on the telephone wire that arcs from pole to pole from where I’m writing this at Crosshands, loops up the road to Hints and beyond to Clee Hill. The two are connected: as the crow flies our village is only 19 miles from Coalbrookdale, the settlement on the banks of the River Severn near Telford where the Industrial Revolution took one of it’s first significant turns. And while this part of the county with it’s coal and dhustone quarries was on one of the spokes of that revolution, it’s been rather left behind in the telecommunications revolution that, in its own way, is every bit as important.

Crows are clever corvids but I doubt mine is bright enough to know the wire beneath his feet is copper. By now, of course, it should be a fibre optic cable. But the high speed service only goes as far as the green cabinet next to the world’s ugliest bus stop (with, admittedly, the world’s prettiest view). So down in Coreley we’re in the slow lane of the information superhighway – and at times on the hard shoulder – with connection speeds barely high enough to enjoy a Netflix night in. And with the village pub now all but closed a night out isn’t an option!

But superfast broadband brings business as well as entertainment down its optical cables so we’re being left behind a bit like an area without those former superhighways, the railways and roads. Our business ACM Training, for example, could employ more people in the parish with a faster Internet connection. But BT and it’s infrastrucure arm Openreach refuse to even put a date on when the final leg from that cabinet to our village will be upgraded. I pointed out to them that they missed a golden opportunity to lay the cable in the same trench as the new water pipe that was laid last year. Is it too much to ask the utility companies to combine forces where it would save them and us double disruption as well as money? Clearly it is.

So if like me you believe super fast broadband is a necessity not a luxury write to BT. Better still send them an email. But just remember for now it won’t be much quicker than the post.